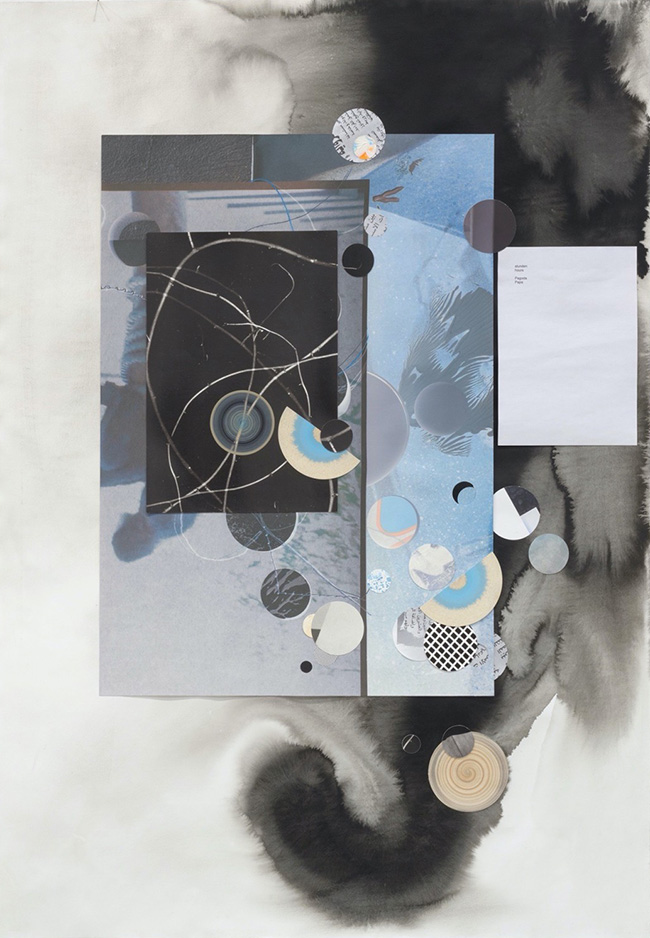 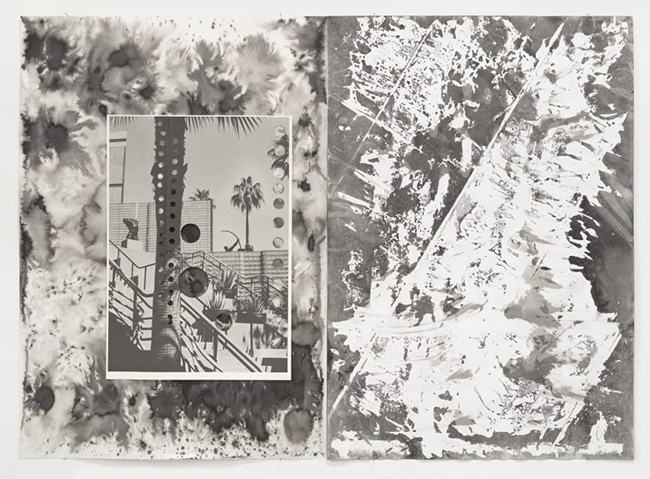 Tanya Bonakdar Gallery is pleased to present Dirk Stewen: Transition, on view January 6 – February 15, 2018. Known for creating unique works that draw on a multiplicity of art-making techniques including photography, drawing, assemblage, painting, collage, and embroidery, Stewen presents two new bodies of collage and watercolor for his fourth solo exhibition at the gallery.

In the upstairs gallery, successions of framed works on paper proliferate the main space, as if sentences punctuating the surrounding architecture. Upon closer look, the individual compositions do include text, but only as modest fragments awash with the brilliant oranges, deep blues, and flesh-toned forms that permeate the paper’s surface.

Following his Feuchtwanger residency at Villa Aurora in Los Angeles in 2013, Stewen returned to Europe with a large volume of archive files— loose art catalogues kept during and after WWII by collectors and admirers of modern masters. These files, often French or German versions brought to California by wartime refugees, contained dedicated pages boasting colorful reproductions of highlighted masterpieces by Matisse, Derain, Picasso, Braque, Klee.

As with most of Stewen’s practice, these compositions begin with a destructive process: divesting each page of its color plate so that only a sparse collection of printed titles, credits or locations remain. In some cases, remnants of this process such as a line of glue or fragment of the reproduction that has been torn out remain on the newly vacant surfaces. Stewen embraces such preludes— the flesh-like tones of the aging paper, text revealing translation errors, wear from previous framing for use as inexpensive wall decoration— often restoring the paper after tearing out the images and before beginning to draw. In some cases, Stewen disregards the printed text and in others allows it to inform the image, eliciting an almost surrealist exquisite corpse relationship between captions which no longer apply and their new pictorial forms.

Stewen however is guided primarily by intuition in building his compositions. His biomorphic images — sometimes worked over and enriched with cut outs— are poised deftly between figuration and abstraction, an ambiguity that belies their making. Opacity and transparency coincide as Stewen allows chance and control to have equal agency. Brilliant hues bleed into one another and shift their contours before setting on the surface. These playful, amorphous forms are the result of an almost instantaneous transfer of pigment and water to paper, as if a photographic exposure to a light-sensitive surface. What remains is a record of the image’s brief moment of becoming captured vibrantly on the surface.

Ultimately, Stewen’s process is one of revival rather than destruction, facilitating a relationship between the original catalogue image and the one he has replaced it with. The gestural nature of his drawings, unlike the printed catalogue pages, represent the artist’s thoughts at a fleeting moment in time rather than specific objects or symbols. Through the transformations of old catalogue pages to artworks themselves, Stewen’s sublime compositions transcend time while simultaneously reinforcing its transition.

In the project gallery new collages incorporate watercolor, gouache, original photographs, found paper and thread elements into masterfully layered picture planes where positive and negative, recession and relief are constantly in flux. Stewen complicates the relationship between drawing and photography in particular throughout his process. Whereas one usually conceives of image formation as instantaneous in photography and as gradual in drawing, for Stewen these pretenses are reversed. His approach to drawing with watercolor leaves only seconds for the image to emerge, exercising his brief influence before observing the colors bleeding and shifting as they quickly dry. His photographs however may be inverted, photocopied, cut out and collaged with other elements, most often circles that have been removed from one of his other works. In some cases, pieces of the photograph have been removed to reveal the watercolor layered underneath, blending the two into a single picture plane.

Stewen’s ambivalent approach to his photographic subjects— a public sculpture garden, an LA street scene, fetish figurines inside a museum vitrine—  subverts one’s usual associations in a way that is both playful and psychological. Initial hints at narrative quickly give way to geometric abstraction and repetition, fluid pigment and text, paper and thread ephemera. These ambiguities are where the compositions draw their power: the interstices of recession and relief, public and private, sobriety and humor underscore Stewen’s unique ability to collapse medium and time.

Employing a process in which erosion and layering simultaneously conceal and reveal his subjects, Stewen’s rich compositions conflate abstraction and figuration, anonymity and biography, chance and intuition— inherent material and conceptual contradictions which bely the work’s rich poetic and psychologically-charged effects on its viewer. 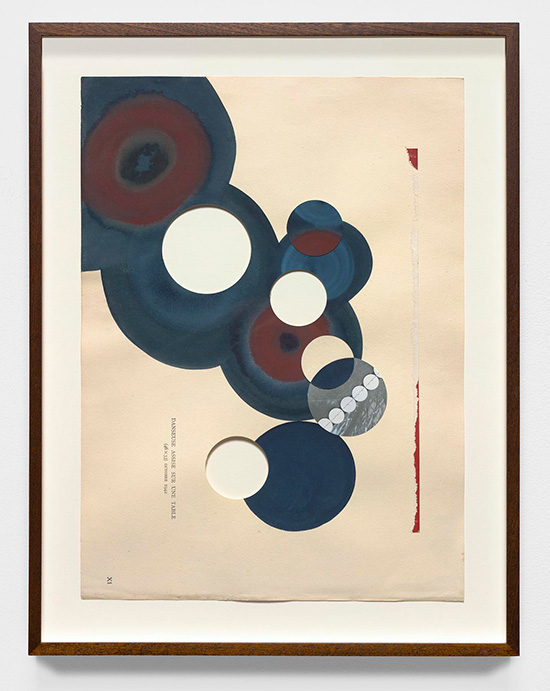