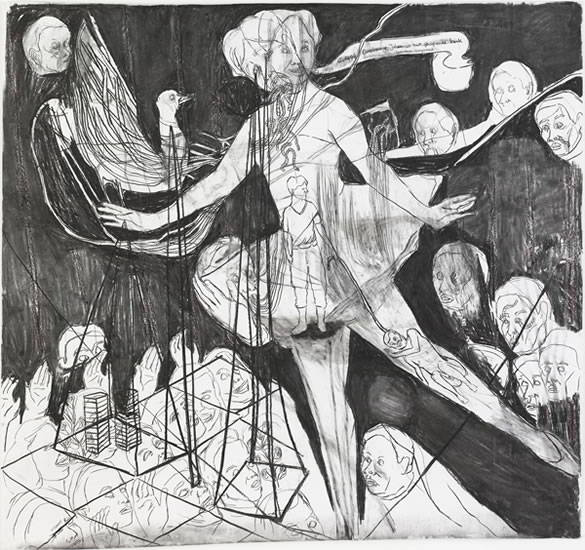 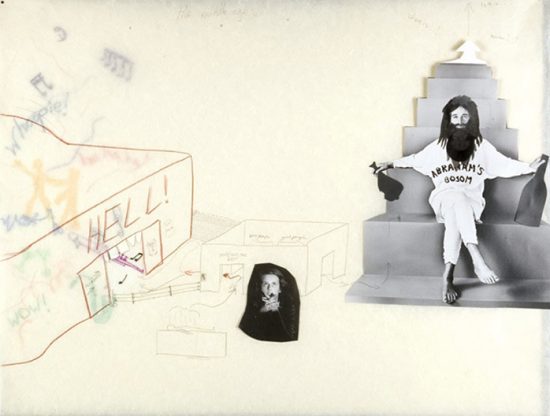 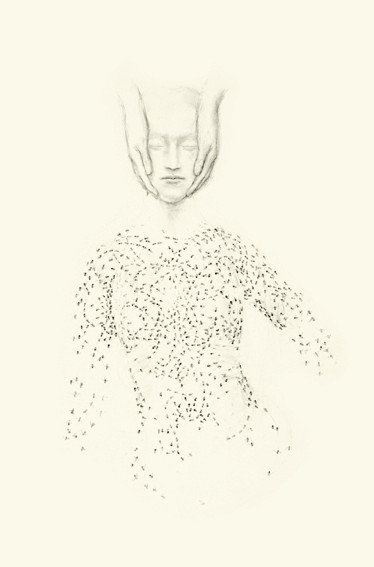 Into Drawing. Introduction from curator Arno Kramer:
Each drawing also carries the history of its creation with it. Much more than in any other discipline of art, a development can usually be seen in a drawing. Often we can even experience and look back step-by-step on how a work has come into existence. The drawing is the medium, which most demystifies art as it were. That demystification especially means making visible that a mystery does not lurk behind everything, a mystery as a deity, the enigma of nature, the magical thinking or a conspiracy of the things, which has never been defined before. Everything arises from man’s behaviour. You can look at that in a fairly business-like way, the way you look at the stars and everything surrounding us, but we can also be surprised at all of that. For example at the beauty of a drawing; that beauty is not the same thing as the drawing itself. Beauty is not a fact, it is rather an experience, a perception. The subtle impression that much contemporary drawing makes can only be achieved through our imagination. That imagination is the only phenomenon in our existence that bridges the gap between the once-only personal experience and the general shared experience that is present in each individual. In our culture the imagination makes for a balance on the borderline of myth and ethos. The drawing has undergone an interesting evolution in the course of many centuries. The drawn image existed before language did, and in meaning it has continued to remain part of life in an entirely different way. The drawing has developed from a possibility to communicate through images, as a precursor of that language, to the autonomous artistic expression it has now become. It has taken a long time, incidentally, for the drawing to acquire that meaning. Nowadays it is the visual artist in particular who gives meaning to the drawing in its purest form. That artist is also the medium through whom the drawing exists and through whom the drawing continually lives and keeps developing. Each line, each flat surface, in short each drawing always contains primary information. Usually no corrections can be made in a drawing.

Even if something is corrected, these corrections often become part of the beauty of the work again. The drawing is everything or nothing. For me, drawing is the act of exploring the reverse side of the soul, the mind, and the heart. The act of making a drawing always balances on the edge of a confession. Usually a drawing is a confession. About melancholy and longing. About doubt and certainty. About reality and fantasy. Sometimes a drawing seems to be a materialised dream, which is mainly about the abolition of knowledge. The drawing is also a monument to the poetics of the artist, in which both signs that point back and signs that point forward can be enclosed. The meaning of the drawing has changed much in the 20th and 21stcenturies. It seems that the autonomous drawing is given more attention again in contemporary art. That is not illogical. The drawing nowadays wants to inform something different from only visible technical skill or the recording of reality. In comparison with the genres in literature, the drawing may be best compared with a poem, with poetry, since poetry can be read in many ways; it brings language most in a state of longing. It leaves much open to personal interpretations. We read as it were meanings between the lines of a poem. Yet there is also a big difference. When we give a name to and when we describe things, the world and feelings, we use language common to everybody. By the choice of words and the order of the words I try to give a metaphorical meaning to my descriptions and my confessions. But in the act of drawing the visual artist in fact searches for his own expressive syntax. Language is such a specific medium that you might say that, as an extension of the inner self, it can at least give form to the exterior of beauty, as K.P. Kavafis wrote in the poem:

I transferred into art
I sit and ponder. Longings and feelings
I transferred into Art – half seen,
faces and outlines, vague memories
of unrequited loves. Let me rely on her.
She knows how to give form to the Exterior of Beauty:
supplementing life almost imperceptibly,
connecting impressions, connecting the days.

In addition, the drawing, more than other disciplines, especially offers the possibility to record impulsive thoughts, unconscious ideas, quickly. The “see ability” that many artists have developed through drawing, is a quality that can be created because the artist easily takes risks and discovers new and unexpected expressive possibilities. Each artist, in whatever isolation he works, also always has a communicative relationship with the “outside world” through what he makes. That communication is in fact an extremely private one. During a conversation, while reading a book or watching a work of art, the spectator at that moment is briefly equal to the maker. This equality is the equality of the consciousness, the poet Joseph Brodsky wrote. Vaguely or clearly, it stays in a person’s memory for the rest of his or her life and sooner or later, at the right or at the wrong time, it determines the individual’s behaviour. Thus, that communication is ultimately as the product of a mutual loneliness of the spectator and the maker. If we continue the comparison with literature for a little while longer, the line is to the artist what the words are to the poet.

The “language” of the image grows with the progress in a drawing. Usually the line is also a syntactical or binding element, that is to say that it carries the drawing. The work further develops itself around the basis of a line drawing. Usually the line is a recurring support. Additions of stains, structures, screens and colours finally determine the tone and the style. Drawing is acting, moving, searching on paper, using technique and forgetting technique. Drawing is always very close to the pure moment of perception, the Irish poet Seamus Heaney wrote. Many artists act fairly naturally. That naturalness of action, the movement and locomotion may form important aspects of the ultimate character of a drawing. Sometimes there is a sensitive, restless search. When the artist does not see the drawing as something that accidentally records a certain moment or a quick thought, he usually searches for that personal, autonomous and ultimate image. In most cases the directness of many drawing techniques is an evident theme for sensitivity. Clarity, veiling, change, masking, directness are all notions that have to do with a secret desire to find things that were not there before. There is in that image that has been created, that has been drawn, something of what was suspected and that was reached for. It has acquired its outline and its meaning on paper. That final coherence of lines and stains, lines that travelled across the paper, stains that originated impulsively that has become the image that is the drawing. Finished!Int